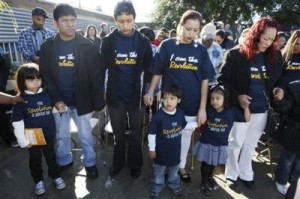 It’s a favourite of Hollywood Westerns – a gun-toting hero rides into town to restore order. Appropriate then, that the first of a new breed of laws handing parents a weapon against their children’s failing schools has made its debut in California.

The new “parent trigger” law gives parents unprecedented power to intervene in the running of public schools. By drawing up a petition, backed by at least 51 per cent of parents, they can force out the school principal, replace the staff, shut down the school or convert it to a privately managed charter school, placing it outside the school district’s control. Variations on California’s trigger law, which came into effect last year, are now working their way onto the state statute books from Texas to New York.

Parents Revolution, the not-for-profit group pushing the legislation, argues these new laws herald the rise of parent power as an answer to the schools crisis. To their critics, however, they signal a worrying breakdown of relations between school administrators and the families they serve.

Lydia Grant, an advocate and member of the board of Parent Revolution, is working with parents at Mount Gleason Middle School in Sunland, California, as they prepare to “pull the trigger”. Parents have had enough, Grant says. As well as underperforming academically, their kids are no longer safe: crime on campus has soared. She believes using the law to remove the principal will let parents into the decision-making process and turn Gleason’s problems around. “This legislation is allowing parents to finally take a stand.” Is there a groundswell of parent anger? “Absolutely.”

For John Rogers, a professor in the graduate school of education at UCLA, the confrontation evoked by the shotgun imagery exposes a fundamental flaw of these laws. Rather than encouraging parents and educators to collaborate in the search for solutions, it pits one against the other. Rogers understands why parents are angry, but fears the focus on a one-time mobilisation offers only an illusion of power. Sack the principal, and then what? “It appears to be taking action, without actually changing anything,” says Rogers. “Its potential to improve the conditions parents face is limited.”

Rogers and the American teachers union favour a more moderate twist on the law that establishes advisory councils where parents hold the majority.

In California, the trigger has been used only once since its introduction in January 2010. Ultimately, Parents Revolution hopes, the threat of the trigger will be enough to empower parents without them having to resort to it. But whether the gun is fired or remains in the holster, there is a danger parents will find their new weapon does little to relieve their frustrations.