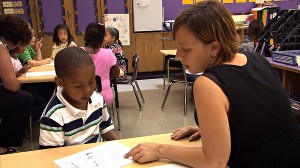 When the union-bashing film Waiting for Superman was released last year, it stole headlines for its depiction of teachers more interested in themselves than their students.

But this month saw the first screenings of a very different take on the profession. American Teacher, an unapologetically sympathetic and frequently sentimental portrait of four heroic teachers, presents an unswerving picture of dedication, self-sacrifice, good humour, and near bankruptcy.

The documentary, produced by novelist Dave Eggers and former teacher Ninive Calegari, argues that for American public schools to recruit and retain teachers up to the task, they must start paying decent wages.

Ignoring the many other issues polarising the education debate here, it focuses solely on the value of good teachers and the hardships they face. We see Jamie Fidler, who in her first year of teaching spent $3,000 (£1,100) on essential supplies for her classroom. Erik Benner, a middle-school history teacher whose difficulty supporting his family, despite a second job stacking shelves, led to the breakdown of his marriage. Rhena Jasey, who confounded her fellow Harvard graduates by choosing teaching and a salary of just $45,000 (£28,000) over medicine or law. And Jonathan Dearman, an inspirational figure at his San Francisco high school, who has now left teaching for a more stable career in real estate.

Rather than a rebuttal of Waiting for Superman, Calegari says the film is an explicit attempt to “elevate the teaching profession” in the eyes of the public. She was struck, she says, by how most non-educators believe teaching to be both important and easy.

That it was necessary to make an 80-minute film to show that teaching is a skill and that talented teachers are working for ludicrously low pay says much about that lack of appreciation. It also makes for a rather ponderous movie.

Still, within its narrow focus, the film does offer an interesting, if limited, historical perspective. (At the beginning of the 20th century, women were encouraged into the classroom in a conscious effort to cut costs; As their opportunities have expanded, the brightest have fled to more attractive professions.) But the crucial role of the unions, past and future, is never mentioned.

Instead, it feels like an impassioned plea to rethink American values. It may be coincidence, but the burgeoning Occupy Wall Street movement is also eschewing specific political demands in favour of a general appeal for fairness. American Teacher may add little to the nitty gritty of the education debate, but as a call to reappraise the culture it resonates with the public mood.