Mind games on the menu in fight against obesity 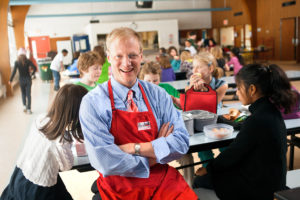 How to make schoolchildren eat their greens? With a third of American children now overweight or obese, that problem has been vexing everyone here from dinner ladies to the First Lady.

For a while, professional chefs seemed to be the answer. Make healthy food taste better, the argument went, and kids will learn to love it. Encouraged by Michelle Obama, celebrity cooks have taken over cafeterias across the country. But as Britain’s own Jamie Oliver discovered earlier this year when he brought his healthy-eating campaign stateside, Americans don’t respond well to being told their diet stinks. Besides, fancy recipes cost a pretty penny.

Attempts to outlaw junk food haven’t worked either. Remove burgers and fries from the menu and kids will remove themselves from the dinner queue.

But researchers at Cornell University are exploring a new line of attack. They are experimenting with a type of culinary psych-op that yields incredible results. The team, led by behavioural economists Brian Wansink and David Just, have found that with subtle psychological tricks they can manipulate children into eating healthily – of their own volition.

Mr Wansink and Mr Just have discovered that by positioning the salad bar more prominently – at little to no cost – children will eat two to three times more salad. And when the chocolate milk is placed six inches behind regular milk, more children will opt for the latter.

Christine Wallace is food services director for the Corning East schools district in upstate New York. Her 11 schools have been taking part in Cornell’s pilot project. “We need to see things from the students’ point of view,” she says. “They’re coming from a morning’s instruction in a very controlled environment. They’re distracted when they go through the lines so we have to grab their attention.”

By applying some of the Cornell techniques, Ms Wallace has seen the number of students buying real meals (as opposed to snacks) rise by more than 30 per cent.

These early successes are impressive, which explains why the Department of Agriculture has awarded $1 million to Cornell to set up a new research centre, and a further $1 million to 14 additional projects around the country.

Mr Wansink and Mr Just will use the money to send researchers into another 100 schools (more than 500 have already applied). They want to prove their approach will work anywhere. They will also try to convince the nation’s poorest schools – in the inner cities and the Deep South – to make the tiny investment needed.

Ultimately, their aim is not just to help Michelle Obama achieve her goal to end childhood obesity within a generation, but also to give children better eating habits for the rest of their lives.

The article at TES