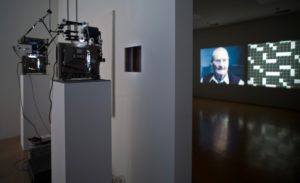 What would it be like, a voice asks during Kerry Tribe’s film in the Whitney Biennial, not to know the fourth dimension time, but just to exist within the three dimensions of space? At once terrifying and tantilising, it’s not quite the impossible question it seems.

Until his death in 2008, one man’s experience of the world was just that. “HM”, a legendary figure in neuroscience, was a severe amnesiac who revolutionised our understanding of how human beings remember.

Henry Gustav Molaison, referred to as HM by scientists, developed epilepsy at the age of nine. By his late 20s, the seizures had become so violent and so frequent, that in 1953, in an effort to save his life, a surgeon called William Scoville performed a “frankly experimental operation” on HM’s brain. On one level the surgery was a fantastic success – it radically reduced HM’s fits. But it also destroyed his ability to form memories.

Scoville had removed a large part of HM’s medial temporal lobes, and with them most of the hippocampus, which, as we now know from the effect this had on HM, is where the brain turns short term memory into long term memory. So that while HM could recall his life before the operation, with a few exceptions, he would never remember anything again. From 1953 onwards, HM’s experience of the world was constrained within the limits of his short term memory. Time for him spanned just 20 seconds.

Tribe’s piece at the Whitney is a narrative account of HM’s life and his unique contribution to science as well as an exploration of the complexity of memory: are the dreams he recounts to scientists at MIT some fragment of memory? How is it he can learn new skills? And why can he recall only generalities and not the specifics of his life before the operation? The piece is also an attempt to convey something of the strangeness of HM’s inner world through a single film projected over two screens with an interval of 20 seconds between them.

If you can’t make it to the Whitney, NPR has another rare recording of HM being interviewed during the late 1990s. Broadcast in February 2007, it includes a contribution from Dr Suzanne Corkin, a neuroscientist who worked with HM for over 40 years.

There’s also a Q&A with Corkin at PBS’s Nova: Science Now, where she explains some of her findings in greater depth. And to keep an eye on how HM continues to serve science after his death, the Brain Observatory in San Diego is keeping a blog of its efforts to preserve, dissect and create a 3D computer model of his famous brain.

Without memory, HM relied completely on others to look after him. He could mow the lawn, watch TV and he loved crosswords, but unable to remember people, relationships were impossible. And yet, when asked if he was happy, he would always answer yes. He didn’t get depressed by his condition or frightened by the endless newness of everything and everyone he encountered. Being robbed of time was, in some way, also a freedom for HM: he couldn’t learn lessons from the past but neither could he experience disappointment or regret. And so he taught us not only about human memory, but also about how the individual constructs a sense of self: how we draw on memories of the past, shaped by our experience in the present, to allow us to move towards the future, as Jefferson A Singer explains in this tribute at Psychology Today.

Dr. Scoville severed the relationship between present and past for H.M. and in doing so he robbed him of the capacity to look forward. And this is the real secret of what H.M. taught us about identity and not just memory. From the standpoint of personality, H.M.’s most profound loss was the future not the past. In every memory lives a dream or a nightmare – if this is what happened before, how can I have this again or how can I make this different?

The Whitney Biennial is at the Whitney Museum of Art, New York City until May 30