Hip Hop High gets off on the wrong track 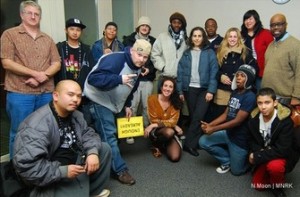 Students at the New York Harbour School specialise in maritime skills, at the Manhattan Free School they invent their own classes, and at Quest to Learn lessons revolve around online games. Innovative approaches to learning are in the air. So, when Oregon’s education department was asked to fund a new charter school focused on hip-hop, it was enthusiastic.

Driving the idea for the school was Erica Jayasuriya, the white mother of a mixed-race child and for 15 years a teacher of the Waldorf (Steiner) method. Ms Jayasuriya saw a chance to use the recording arts to engage the city’s disaffected kids. Urban culture would provide a lens through which to teach all the standard subjects, including maths and English.

Oregon approved funding in November 2009 and the local schools district, Portland Public Schools (PPS), issued a contract. Consultants were engaged to develop the curriculum, a building was found and a lease signed. Hip Hop High, by then renamed REAL Prep Charter Academy, seemed to be on track.

Exactly what happened next is a matter of dispute. But at some point between late July and mid-August it became clear that a miracle would be needed if REAL Prep was to open on 6 September. Federal funds totalling $505,000 (£315,000) had been exhausted, but there were still no chairs or desks, no recording equipment or computers, and no finalised curriculum. There were no teachers and only a handful of students had been enrolled. The building was a construction site.

On 1 September, less than a week before the start of term, Portland Public Schools told REAL Prep’s fractured leadership that the school would not be opening this year or, most likely, ever.

Oregon is conducting an inquiry into how the money was spent, while PPS is reviewing its internal processes. Both, however, insist they were scrupulous in their oversight. PPS says blame lies with REAL Prep’s board, but that the root cause was probably neither incompetence nor corruption but “unfounded optimism”.

Ms Jayasuriya accepts some of the charges levelled at her. Yes, she paid herself, but a consultant’s fee below the going rate. And yes, the hoped-for relationships with recording artists and entrepreneurs failed to materialise. But she denies there was cronyism in the choice of specialist contractors, or that she concealed the mounting problems.

Was her vision over-ambitious? Perhaps, she concedes. “We are going to try our best to bring this to fruition. We did this for our city, for the students. There were mistakes that we made. You make mistakes when you’re trying something new.”