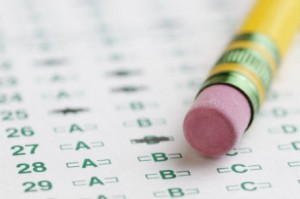 In 2009, Dr Jackie Boyce was serving as a classroom monitor during Atlanta’s annual school tests when he discovered that several teachers were giving students the answers. He informed the principals and his own administrator.

The next day he was summoned to a meeting, told he was under investigation for making false allegations and that a reprimand would be placed in his file. The cheating teachers, meanwhile, were cleared without inquiry.

Dr Boyce had not witnessed a one-off incident, but had fallen foul of the most extensive, organised system of cheating in the history of America’s public schools.

Two years on, an investigation led by Georgia’s state governor has exposed the extent of the scandal. The report, published in July, details test-tampering in 44 of Atlanta’s 56 public schools. At least 178 teachers were involved, 38 of whom were school principals. Eighty-two of the accused have confessed. It began as early as 2001, and continued unchallenged for a decade.

Teachers gathered at cheating “parties” to erase incorrect answers and replace them with correct ones: they used transparent plastic test sheets for easier erasure, sat the less accomplished children next to the higher-scoring ones, and suggested the correct answers by pointing, through voice inflection or simply by telling students the answers. In one incident, a child sat under a desk and refused to take the test. He still, miraculously, passed.

Under the federal No Child Left Behind act, children in America’s public schools are required to achieve Annual Yearly Progress. Their test scores are used to gauge achievement, which helps determine future school funding. Success is rewarded, failure punished.

In Atlanta, the investigators concluded, targets were unrealistically high and “the pressure to produce results by any means necessary became more important than real academic progress”. They found a “culture of fear, intimidation and retaliation… from the highest ranks down”.

Atlanta’s public schools superintendent Beverly Hall, who investigators say knew or should have known about the cheating, bullied the school principals, who in turn bullied their teachers.

Teachers had three years to reach their targets or be sacked. Fear reigned and whistle-blowers such as Dr Boyce were punished. The biggest victims were the children, who were given a false sense of their progress and were not given the remedial attention they needed.

Robert Schaeffer, public education director of FairTest, the National Centre for Fair and Open testing, says the importance placed by politicians on test results makes cheating inevitable: “Tests should never be used as the primary factor to make high-stakes decisions.”

According to Mr Schaeffer, over the past three academic years there have been confirmed cases of cheating in 27 states and the District of Columbia. Reports of widespread cheating in Pennsylvania have also recently emerged. Mr Schaeffer is unsurprised. “The more you look, the more you’re going to find.”

This article at The Times Educational Supplement